Congratulations! You’ve finally written so many lines of code that you can afford a beach house. You hire Peter Keating, an architect world-famous for his skyscrapers, who assures you that he has brilliant plans for your beachfront property.

Months later, you arrive at the grand unveiling. Your new home is an imposing five-story behemoth of steel, concrete, and reflective glass. As you pass through the revolving doors, you track sand onto the opulent marble floor. Inside, you find a reception desk backed by an elevator bank. Upstairs, your master bedroom and three guest rooms are just four adjoining office cubicles. 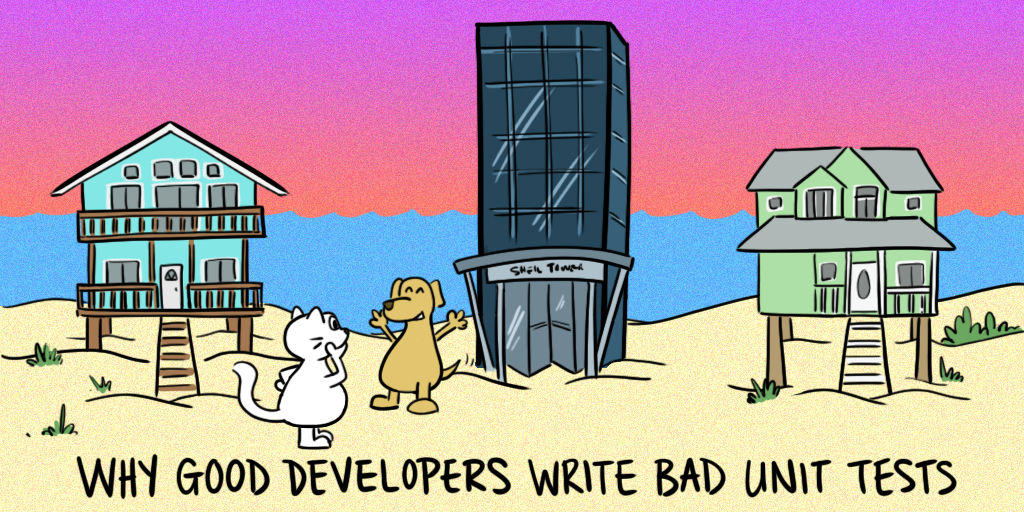 Peter Keating, expert architect, can’t understand why you’re disappointed. “I followed all the best practices,” he tells you, defensively. The walls are three feet thick because structural integrity is vital. Therefore, your home is better than the breezy, light-filled homes neighboring it. You may not have large, oceanside windows, but Keating tells you that such windows are not best practice — they reduce energy efficiency and distract office workers.

Too often, software developers approach unit testing with the same flawed thinking. They mechanically apply all the “rules” they learned in production code without examining whether they’re appropriate for tests. As a result, they build skyscrapers at the beach.

Production applications typically involve thousands to millions of lines of code. They’re too large for humans to conceptualize all at once. To manage the complexity, language designers have provided mechanisms like functions and class hierarchies that allow developers to think in abstractions.

Good production code achieves encapsulation. It allows the reader to navigate large systems with ease, diving down into the details or rising to a higher level of abstraction, as needed.

Test code is a different beast. A good unit test is often small enough that a developer can conceptualize all the logic at once. Adding layers of abstraction to test code increases its complexity. Tests are a diagnostic tool, so they should be as simple and obvious as possible. 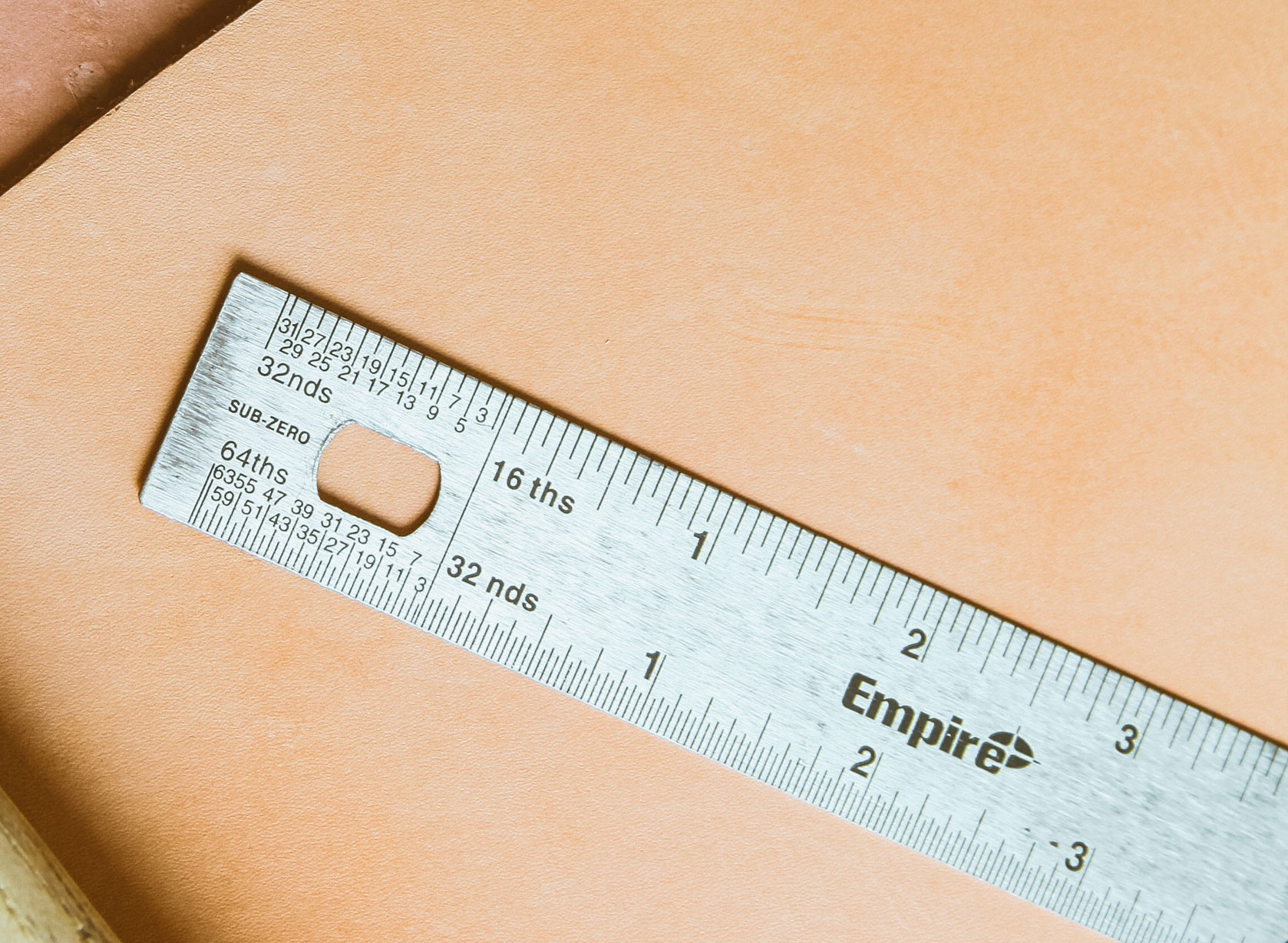 Think of a ruler. It has existed in the same form for hundreds of years because it’s uncomplicated and easy to interpret. Suppose I invented a new ruler that measured in “abstract ruler units.” To convert from “ruler units” to inches or centimeters, you’d use a separate conversion chart.

If I offered such a ruler to a carpenter, they’d smack me in the face with it. It would be absurd to add a layer of abstraction to a tool that gives clear, unambiguous information.

Good test code is no different. It should produce clear results without forcing the reader to jump through multiple levels of indirection. Developers often lose sight of this because it differs from how they learned to write production code.

What does that test do? It retrieves a “score” for a user with the name joe123 and verifies that the score is 150. At this point, you should have the following questions:

Perhaps the answers are in the setUp method, which the test framework calls before executing each test function:

Okay, the setUp method created the joe123 user with a score of 150, which explains why test_initial_score expected those values. Now, all is well with the world, right?

Keep the reader in your test function 🔗︎

If a test breaks, the reader should be able to diagnose the problem by reading the test function in a straight line from top to bottom. If they have to jump out of the test to read ancillary code, the test has not done its job.

With this in mind, here’s a rewrite of the test from the previous section:

All I did was inline the code from the setUp method, but it made a world of difference. Now, everything the reader needs is right there in the test. It also follows the arrange, act, assert structure, which makes each phase of the test distinct and obvious.

The reader should understand your test without reading any other code.

Inlining the setup code is all well and good for a single test, but what happens if I have many tests? Won’t I duplicate that code every time? Prepare yourself, because I’m about to advocate copy/paste programming.

Here’s another test of the same class:

For strict adherents to the principle of DRY (“don’t repeat yourself”), the above code is horrifying. I’m blatantly repeating myself; I copied six lines from the previous test verbatim. Worse, I’m arguing that my DRY-violating tests are better than tests that are free of repeated code. How can this be?

If you can achieve clear tests without duplicating code, that’s ideal, but remember that nonredundant code is the means, not the ends. The end goal is clear, simple tests.

Before blindly applying DRY to your tests, think about what will make the problem obvious when a test fails. Refactoring may reduce duplication, but it also increases complexity and potentially obscures information when things break.

Accept redundancy if it supports simplicity.

Maybe you can live with copy/pasting six lines in every test, but what if AccountManager required more setup code?

That’s 15 lines just to get an instance of AccountManager and begin testing it. At that level, there’s so much boilerplate that it distracts from the behavior you’re testing.

Your natural inclination might be to delegate all the uninteresting code to test helper methods, but you should first ask a more vital question: why is the system so difficult to test?

Excessive boilerplate code is often a symptom of weak architecture. For example, the test above reveals several design smells:

AccountManager accesses the user_database directly, but its next parameter is privilege_manager, a wrapper for privilege_database. Why is it operating on two different layers of abstraction? And what is it doing with a “URL downloader?” That certainly seems conceptually distant from its other two parameters.

In this case, refactoring AccountManager solves the root problem whereas adding helper methods would merely bury the symptoms.

When tempted to write test helper methods, try refactoring your production code instead.

If you need helper methods, write them responsibly 🔗︎

You don’t always have the freedom to tear apart a production class for testability. Sometimes, helper methods are your only choice, so when you need them, write them well.

An effective helper method supports the principle of “keep the reader in your test function.” It’s okay to extract boilerplate code into a helper function as long as it doesn’t degrade the reader’s understanding of the test.

Specifically, helper methods should not:

Here’s an example of a helper method that violates these guidelines:

The reader can’t understand why the final score should be 175 unless they search out the 150 hidden in the helper method. The helper also obscures account_manager’s behavior by hiding a call to add_account instead of keeping all interactions in the test function itself.

Here’s a rewrite that addresses those issues:

It still buries values in the helper method, but they’re irrelevant to the test. It also pulls the add_account call back into the test so that the reader can trivially trace everything that happens to account_manager.

Keep helper methods free of any information the reader needs to understand the test.

Which of the following function names would you prefer to see in production code?

The first conveys more information but imposes the burden of a 57-character name. Most developers are willing to sacrifice a bit of precision in favor of for a concise, almost-as-good name like isAccountActive (except for Java developers, for whom both names are offensively terse).

For test functions, there’s a crucial factor that changes the equation: you never write calls to test functions. A developer types out a test name exactly once – in the function signature. Given this, brevity still matters, but it matters less than in production code.

Whenever a test breaks, the test name is the first thing you see, so it should communicate as much as possible. For example, consider this production class:

Suppose you ran your test suite and this line appeared in the output:

Would you know what caused the test to fail? Probably not.

A failure in TestNextToken tells you that you screwed up the NextToken() method, but that’s meaningless in a class with a single public method. To diagnose the failure, you’d have to read the test’s implementation.

Instead, what if you saw this:

A function called ReturnsNullptrWhenStreamIsEmpty would feel overly verbose in other contexts, but it’s a good test name. If you saw it break, you’d immediately know the class was mishandling empty data streams. You could likely fix the bug without ever reading the test’s implementation. That’s the mark of a good test name.

Name your tests so well that others can diagnose failures from the name alone.

It’s the “don’t talk to strangers” of the programming world. Many skilled developers internalize this lesson so profoundly that they never consider when a magic number might improve their code.

As a refresher, a “magic number” is a numeric value or string that appears in code without information about what it represents. Here’s an example:

Programmers agree that magic numbers in production code are A Very Bad Thing, so they replace them with named constants like this:

Unfortunately, there’s a misconception that magic numbers also weaken test code, but the opposite is true.

If you believe magic numbers are universally evil, the above test looks correct to you. 72.0 and 8.0 have named constants, so nobody can accuse the test of magic numbers.

But, just for a moment, suspend your religious beliefs and indulge in the forbidden fruit of magic numbers:

It’s simpler, with only half as many lines of code. And it’s more obvious — the reader doesn’t have to bounce around the function tracking names of constants.

When I see developers define constants in test code, it’s usually due to a misguided adherence to DRY or because they’re afraid to use magic numbers. However, it’s rarely necessary for tests to declare constants, and doing so makes them harder to understand.

Prefer magic numbers to named constants in test code.
Note: It’s okay for unit tests to reference constants that the production code exposes. They just shouldn’t define their own.

To write excellent tests, a developer must align their engineering decisions with the goals of test code. Most importantly, tests should maximize simplicity while minimizing abstraction. A good test allows the reader to understand intended behavior and diagnose issues without ever leaving the test function.