When I arrived on the scene, it wasn’t a pretty sight.

I saw formerly active, cheerful Python classes in a sorry state of atrophy, having gone years without exercise. Functions at all levels of abstraction were crammed together inhumanely under the label utils. I tried to read the UI code but found something obstructing it. After a closer look, I was overcome with nausea. The obstructions in the view layer were, in fact, gory chunks of business logic.

The code was dead.

In this three-part series, I’ll show you how I resurrected it and built a business with the result: 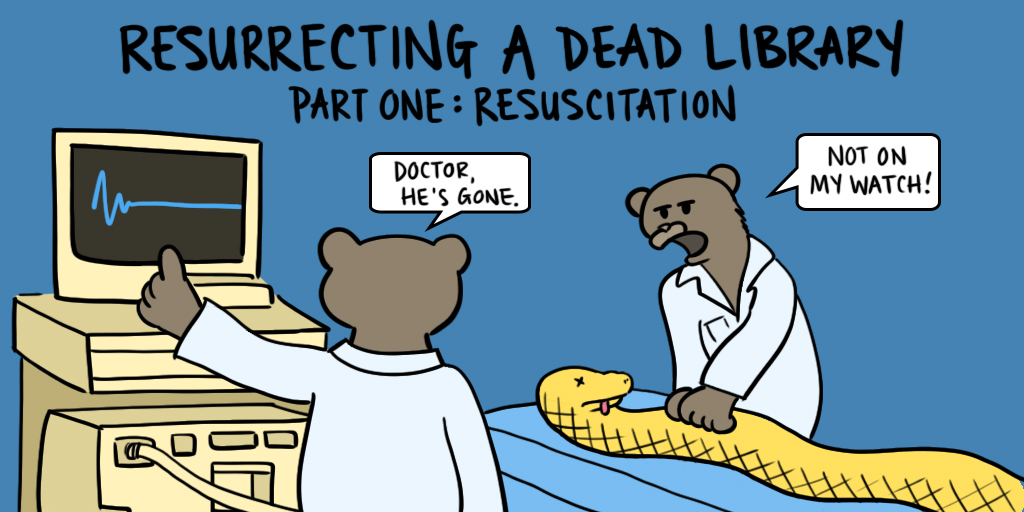 The library was ingredient-phrase-tagger, an open-source library that The New York Times published. It allowed users to parse recipe ingredients into structured data.

A few years ago, the Times decided to digitize their extensive historical archive of cooking recipes. They hired data entry workers to look at raw ingredients from these recipes and tease apart the data they represented. The result was a database that looked like this:

After six years of adding to this database, they realized that they had enough data to train a machine learning model that could simulate the human workers’ data entry decisions. The project was a success, so they published all of their source code and data.

What business was it of mine? 🔗︎

I had the same problem as the Times. My project KetoHub aggregates recipes from around the web and makes them searchable by ingredient. Recipe websites typically don’t publish their ingredient lists in a structured format, I had to tease apart the structure myself.

At the time I stumbled upon ingredient-phrase-tagger, I was parsing ingredients in an ugly, hacky way: with regular expressions.

It wasn’t sustainable. Every time I added a new recipe site to KetoHub’s index, I had to modify my long sequence of regular expressions to handle new edge cases. Over time, the ingredient parsing code grew hellishly convoluted and began breaking in confusing ways.

My regular expressions were tedious to maintain and debug. I felt like I was chopping away at ingredients with a chainsaw, blindfolded. The Times’ library looked like it dissected ingredients with clean, surgical precision. I desperately wanted it.

But first, I had to figure out how to make their code run.

Why was this hard? 🔗︎

The Times built this library for a hack week event, so it lacked many features one expects of a professional software project, such as automated tests or thorough documentation. The README included instructions for installing the application, but they only worked on Mac OS X. Without tests or a continuous integration configuration, it was unclear how to make the code run at all.

Of course, I wasn’t the only one to notice these issues. At the time they published, the Times received tough criticism from famed Python developer D. John Trump:

Building it in Docker 🔗︎

I wanted to build the library in a way that ensured consistent behavior regardless of the OS. This seemed like a job for Docker.

Docker allows developers to build self-contained environments for an application that run anywhere. It only took a single command for me to spin up an Ubuntu base environment on which to build:

The CRF++ build instructions looked simple enough, so I ran the commands within my Ubuntu container:

Whoops, make failed with an error about a missing Windows header file.

Was that code still maintained?

Oh no! Another dead repository? I was already resurrecting one library. I didn’t want to take on another.

The CRF++ error message about winmain.h was a bad sign, but if the Times developers ran CRF++ on OS X, I knew it was possible to run it in a non-Windows environment.

Maybe someone had already fixed it, but the maintainers never merged in the change. I checked the repo’s outstanding pull requests. One, in particular, seemed promising:

The pull request might as well have been titled, “Hey look, Michael! I solved the exact problem you’re struggling with,” so I applied @humem’s patch:

…and then tried building again:

Now, all I had to do was make install and run CRF++:

No! The installation succeeded, but CRF++ immediately blew up with an error about a missing library.

I Googled the error message and found a StackOverflow answer telling me to run the ldconfig command. I tried it and…

Actually building it in Docker 🔗︎

Oh, wait. That wasn’t really what I was trying to do.

My yak shaving adventure sidetracked me so much that I forgot my original goal: run ingredient-phrase-tagger within a Docker container.

Nevertheless, I was hopeful that the worst was over. The only other installation step was to run the library’s setuptools installer, and I generally had good luck with setuptools:

Whew! No problems there. It looked like I had everything installed.

Taking it out for a spin 🔗︎

Hmm, so this Python library needs Ruby for some reason. Fine, let’s try that again:

It ran for about five minutes and spit out lots of output, finally ending with this:

Testing with my ingredients 🔗︎

The library was doing something, but it didn’t give me insight into what was going on. The documentation mentioned two scripts for parsing arbitrary ingredients, parse-ingredients.py and convert-to-json.py, so I tried those:

Well, it mostly worked. The model failed to identify “Cup” as the unit of measurement in “1 Cup Mozzarella, shredded.” The machine learning model apparently thought there was a product called, “Cup Mozzarella,” and the recipe needed one of those.

I didn’t want to go through all of those steps every time I ran the library, so I needed a way to speed up the installation process.

First, I made my own fork of the CRF++ repository that included @humem’s fix. That provided a convenient copy of CRF++’s source that built cleanly on Linux. Then, I collected all of the shell commands I ran into a Dockerfile:

If I want an environment with this library in the future, all I need to do is run these two commands in the directory with the Dockerfile:

Those commands create a Docker container that satisfies all of the ingredient parsing library’s dependencies. Within that environment, I can run the roundtrip.sh script without any errors:

To make it even easier, I uploaded the container image to Docker Hub so that all of you at home can use my container with this single command:

I recorded the demo below on an Ubuntu system with nothing installed except Docker. I used it to pull down my custom image from Docker Hub, train a machine learning model, and parse a new ingredient:

The code ran successfully, and my work was reproducible on any system that supported Docker. What was next?

I hadn’t dug into the source yet, but I noticed odd things from running the scripts. Most notably, the usage scripts felt opaque and rigid — training data, file locations, and model parameters were all hard-coded and buried in shell scripts. I wanted the user to have the freedom to tune these values to optimize the model’s accuracy.

Also, did you catch this in the parsed output?

Why is a machine learning model responsible for structuring ingredient data and generating HTML? That would be like putting a neurosurgeon in charge of brain surgery and assembling hospital furniture.

I would have loved to dive right into the code to make sweeping functional changes, but first I had to perform a critical step: stabilization. I needed to lock in the library’s existing behavior so that any changes I made to its functionality were explicit and deliberate.

I cover that in part two of this series, which describes: