I love refactoring. Nothing satisfies me more than untangling spaghetti code to reveal its underlying logic in a clear, intuitive way.

I’ve learned that refactoring requires diligence. In my younger and more reckless days, I would rush into a legacy codebase and tear apart the code without any concern for controlled changes. Inevitably, days or weeks later, I would discover that I broke the code by removing a subtle piece that seemed irrelevant but was, in fact, critical for an obscure scenario.

In this post, I’ll show how to refactor with care. I’ll explain the techniques I applied to refactor a real legacy Python library. It includes the development toolchain I used to minimize my errors and my process for adding unit tests to lock in existing behavior.

This is the final post in a three-part series about how I resurrected ingredient-phrase-tagger, a library that uses machine learning to parse cooking ingredients (e.g., “2 cups milk”) into structured data. Read part one for the full context, but the short version is that I discovered an abandoned library and brought it back to life so that it could power my SaaS business: 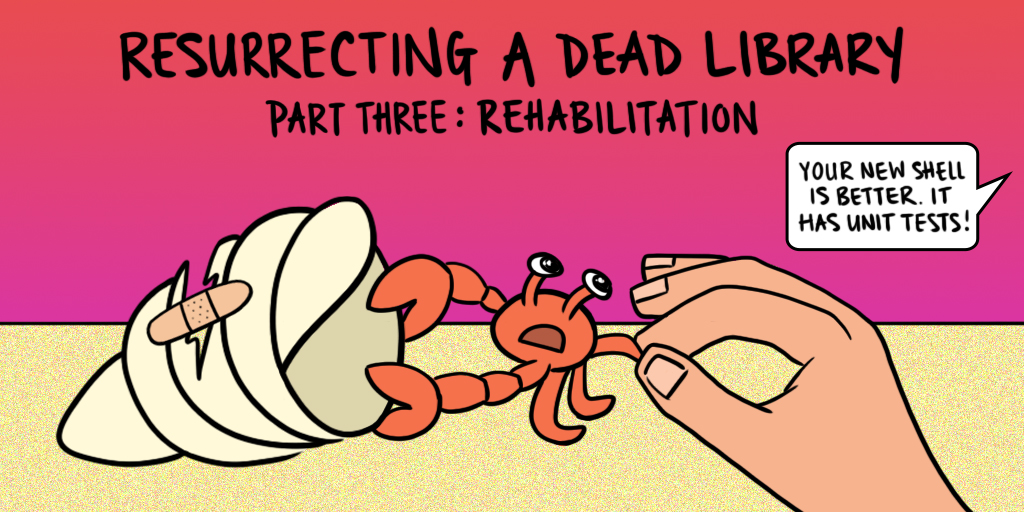 In the previous two blog posts, I created a custom Docker image so that I could use this library anywhere and added an end-to-end test to preserve high-level behavior. Upon every change to the codebase, Travis continuous integration built all dependencies and executed the test in a controlled environment.

Until this point, I hadn’t modified the code itself. I only added tools and scripts on top of existing code to verify its behavior. Now that I had all the mechanisms in place to modify the code safely, I could finally begin refactoring.

Developers should never waste mental energy on whitespace. Whenever I start a new software project, I automate the whitespace formatting as early as possible.

For Python projects, I achieve this with YAPF (Yet Another Python Formatter). My first code change in this project was to reformat all files to match Google’s Python Style Guide, my preferred standard:

This introduced significant code churn, but I was confident that this was a safe change because YAPF is a mature tool and my end-to-end test still passed.

I was careful to limit my pull request to only whitespace changes so as not to bury anything else in the noise and make the pull request difficult for other developers to review.

To ensure that future changes would adhere to the same style conventions, I added a new check to the build script:

It’s the same as the earlier command, but with a --diff flag instead of the --in-place flag. If YAPF detects whitespace violations, it will print them out, then emit a failing exit code, causing the build script to terminate in failure.

pyflakes is another handy component I always add to my Python toolchain. It uses static analysis to identify careless errors such as uninitialized variables or unused imports.

I added it to my ingredient-phrase-tagger build script, and it immediately caught an unused import:

Time to read the code 🔗︎

You may have noticed that throughout this process, I’ve avoided any attempts to understand the code. I skated by with only a cursory understanding of the library’s behavior.

The best way I’ve found for reading code is to refactor and test as I go. Famed software expert Martin Fowler describes this process best:

When I look at unfamiliar code, I have to try to understand what it does. I look at a couple of lines and say to myself, oh yes, that’s what this bit of code is doing. With refactoring I don’t stop at the mental note. I actually change the code to better reflect my understanding, and then I test that understanding by rerunning the code to see if it still works.

80% of all code in the library was in just two of its files: cli.py (command-line interface) and utils.py (utilities). In other words, the authors split the code into two buckets: “user interface” and “everything else.” But even this wasn’t a clean separation.

Very little of the code in cli.py related to reading or writing from the command line. It consisted of a single class called Cli with the following methods:

My first order of business was to slim down the Cli class so that it formed a more logical abstraction of a command-line interface.

To break up the Cli class, I needed a starting point. generate_data sure didn’t seem to belong in a class responsible for managing a user interface, but I couldn’t immediately move it. generate_data called Cli's other methods through its self parameter, meaning it shared state with the rest of the class.

Or did it? Every function in cli.py was a member method of the Cli class, but did they actually share instance variables?

The constructor assigned a value to self._upstream_cursor, but nothing ever referenced that variable. It was dead code, so that was an easy deletion.

The other member variable, self.opts wasn’t dead, but only two methods referenced it: run and generate_data.

With no shared state, there was no reason for any of Cli's other public methods to be methods at all. They could all live happily as module-level free functions. Better yet, I could move them to an entirely new module that described their purpose better than cli.

Once I discovered that most of Cli's methods could live in another module, I had to design that new module. I could, of course, move every function there and make them all public, but I wanted to find a minimal interface between the Cli class and this new module.

I realized that Cli called all of the other functions within the loop body of generate_data. If I extracted that code to a new function, Cli would need access only to the new function and none of its previous methods.

This change made the Cli class slimmer and more logically cohesive. It now consisted of just two public methods and one private one:

It still wasn’t perfect, but it was better than the previous, bloated interface. There were certainly many more changes that I wanted to make, but those would have to wait.

To minimize the probability of mistakes, I kept tight scope for each pull request in the refactoring. When moving code between files, it’s especially important to minimize change because the move itself makes it hard to notice line-level modifications.

My end-to-end test passed, which told me I didn’t break anything significant in the move, but my work wasn’t done yet. My refactoring created a new function, which meant I needed a new unit test to exercise it.

Creating the unit test was easy. I temporarily added debug log statements at the beginning and end of translator.translate_row to print the inputs and outputs. Those values became the input and expected output of my first unit test:

I still didn’t fully understand what this function did, but the unit test brought me closer. I saw that it processed the library’s training data, which was in a CSV file that looked like this:

It returned a set of tab-separated values that the library’s machine learning engine understood.

Unit tests aren’t much fun unless they’re integrated into the build process, so I updated my build script to include them:

Because Travis continuous integration was already running my build script on every code change, I saw the unit test output on the next Travis build:

While refactoring, I love watching the code coverage percentages climb as I bring more code under test. In Python projects, I use the coverage module to collect coverage information and Coveralls to make the results available in a web dashboard.

Switching from Python’s native unit test runner to coverage required only a trivial change to my build script:

Then, I added an after_success key to my Travis configuration so that Travis would upload my code coverage information to Coveralls.

I checked Coveralls, eager to see my code coverage stats, and…

Where did my code coverage go? 🔗︎

That was an easy fix. I just had to add a command to extract the .coverage file from the Docker container:

Still, the Coveralls dashboard showed nothing:

However, the Travis build printed output that didn’t appear in previous builds:

That’s when I realized there was another problem.

Travis and Docker had conflicting views of the filesystem. For example, here is how they each saw the cli.py file:

Given that, the error message that coveralls printed in Travis made more sense:

Coveralls couldn’t find the file because the paths in .coverage were based on the Docker container’s view of the filesystem. The /app path didn’t exist on the Travis filesystem.

How could I bridge the gap between these two different environments with incompatible views of the same files? I found a solution, but it was a bit convoluted.

In the documentation for coverage, I noticed that it supported a paths option that discussed combining paths from multiple filesystems:

To use these options, I created the following .coveragerc file:

After applying this solution, the after_success section of my Travis configuration looked like this:

I put my full solution to the test. Finally, Coveralls received the results and displayed my code coverage numbers:

I pronounce this library resurrected 🔗︎

After integrating code coverage tracking, I felt like this library was alive again. It wasn’t going to win any awards for quality, but the infrastructure was in place for me or any other developer to continue iterating on the code with high confidence.

Throughout this series of blog posts, I described how I improved the library in small, discrete steps. This minimized the potential for bugs but perhaps obscured the bigger picture. For a bit of perspective, allow me to review the high-level improvements I made to the library in the process of resurrecting it:

Refactor one to throw away 🔗︎

Given how proud I was of these changes, it may surprise you to learn that after a few more weeks of improving the code, I abandoned it in favor of a total rewrite.

…plan to throw one away; you will, anyhow.

The more I refactored the code, the more I recognized problems with its fundamental architectural. That doesn’t mean that I wasted effort in improving the code — I needed to get my hands dirty to develop a deep understanding. Once I understood everything, I felt comfortable rewriting it from scratch for better maintainability and performance.

The result was a service called Zestful. It offers functionality similar to ingredient-phrase-tagger, but in a hosted API. It allows clients to parse ingredients immediately without jumping through all the hoops I did to make the original library functional.

If you’d like to see Zestful in action, check out the live demo: 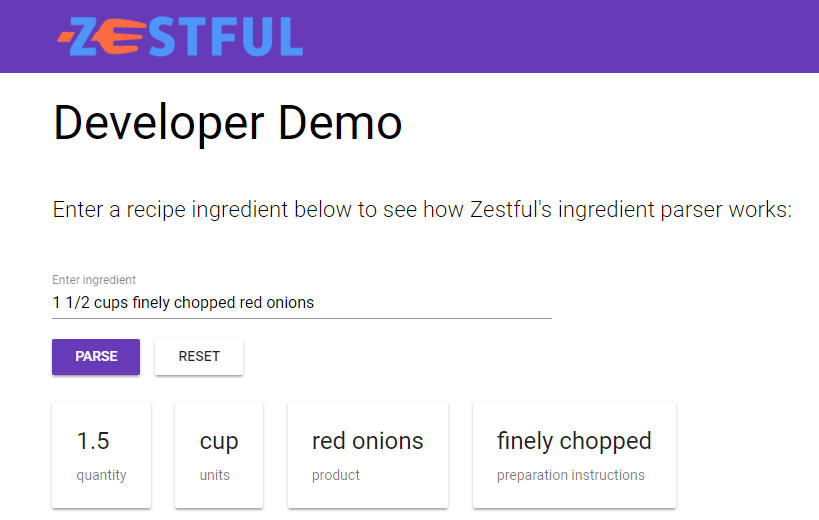 If you’re a developer and you work on software that handles recipe ingredients, let’s talk. Shoot me an email at michael@mtlynch.io.