A record month, but it's time to give up.

At the start of the month, I laid out some high-level goals. Because of Is It Keto’s slow growth, I declared these to be goals the site must meet or else I’d stop working on it.

This was the site’s highest revenue month, almost doubling the previous record set in January. At this level of traffic, revenue levels seem to be smoothing out to a few dollars per week rather than isolated bursts on just two or three days for the entire month.

That said, $40 is small potatoes. It doesn’t even meet the goal I was trying to hit back in January when I began setting monthly revenue targets.

I made a longshot bet that other keto sites would link to me if I created interesting visualizations about keto recipes. Sadly, it didn’t pan out. Most sites didn’t respond to my inquiries, and the ones that did felt that their readers wouldn’t be interested.

In January and February, I set more aggressive goals for publishing new food articles (75 and 30, respectively). March’s target was deliberately conservative so that I could focus on strategies for increasing incoming links. This was a nice, easy goal, so I beat the target by a small amount.

Conversion rates have been promisingly high. I don’t have numbers for February due to my link tag screwup, but my January conversions were 23%. Both of these are substantially higher than on this blog, where conversion is around 3%. It seems like if users click the “Where to Buy” link on Is It Keto, they’re typically ready to make a purchase.

There was a precipitous drop in affiliate link clicks relative to February, but I suspect February’s numbers were not accurate. I tried to correct for the link confusion in February by correlating clicks against my Google Analytics data, but now I’m skeptical that Google Analytics recorded every click. It seems too suspicious that clicks dropped by 36% while pageviews increased by 34%.

So much of Is It Keto’s success depends on how Google ranks me for a query like “is Metamucil keto?" If my article is the #1 result, that one page can bring in 1,000 visitors per month. If the article is in the #15 spot, I’ll only receive a handful of visitors.

Google loved me in March! Almost every Is It Keto article is now in Google’s search index, and it ranked me higher in search results for many new terms. The number of keywords for which Is It Keto appears in the first page of results exploded from 99 in February to 448 in March.

In February, there were only two Is It Keto pages that appeared more than 500 times in Google search results. In March, that number increased to 18. Of those, 11 pages received 1,000 impressions or more.

I’m not sure why there was such a dramatic boost this month. It could be that there’s an age component to it, so my links are bubbling to the top of results as more users click. Or it could be that Google is ranking me more favorably as the breadth of my site has grown, so I’m a more trustworthy authority on the keto diet now that I’ve reached 173 articles.

In winding down the site, I reduced the hours of my content writers and my Twitter manager. As a result, this was my lowest level of spending since I began focusing on the site in December.

Despite March being my highest revenue month, the costs highlight the tininess of my revenue. One of my writers charged $50/hr, so my entire month of income wouldn’t be enough to pay for a single hour of her time.

Over the past few months, it’s become clear that Is It Keto’s primary source of growth is organic search. And for the site to rank well in search results, other reputable sites need to link to Is It Keto.

This presented a difficult challenge. Every page on Is It Keto is just an explanation of why a particular food is or is not keto. The Huffington Post is never going to get excited about my article on Lily’s Chocolate and do their own write-up about what how groundbreaking it is. There are big keto sites that presumably have an interest in keto content, but they don’t want to link to someone else’s explanations about which foods are keto.

I tried to think of what unique advantages I had over other keto sites. My one secret weapon was KetoHub, a keto recipe search tool I built in 2017. It scrapes keto recipes from the web into structured data:

My idea was to create compelling visualizations from my KeotHub data. And then once I had some examples, approach major keto sites and ask if they want to republish my charts. Or I could even create custom visualizations about the recipes on their specific site. In exchange, they just had to provide attribution in the form of a link back to Is It Keto.

To start out, I made a bubble cloud of how frequently different ingredients appear in keto recipes: 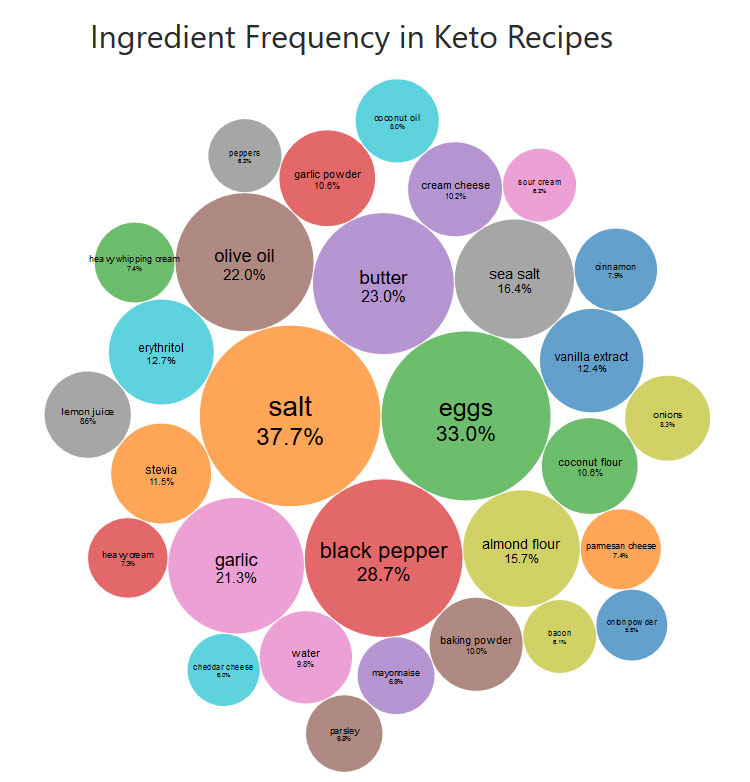 This was harder than I anticipated. I used D3.js, which is a powerful visualization library, but it’s also incredibly complex. I spent a week cobbling together bits of various tutorials in order to get that bubble cloud working.

I reached out to a few keto sites that I had spoken to in the past through KetoHub, but most of them ignored my message. The few that did respond seemed put off by my proposal. To them, it came across as yet another spammer with offers of, “I’ll pay you if you let me write a guest post on your blog and link to my shady website.”

My subsequent blog post was about artificial sweeteners, as they’re a contentious topic in the keto community. I showed how different sweeteners rise and fall in popularity over time: 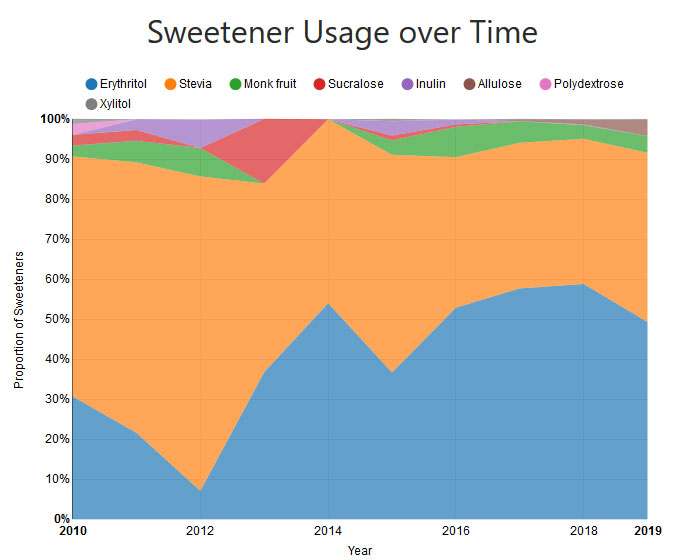 This time, I used NVD3, a more user-friendly interface to D3 that my friend suggested. It was still a clunky process, but substantially easier than raw D3. I also decided to stick with more traditional visualizations like pie charts and line graphs. This sped up the process because staying within common scenarios meant there were plenty of examples.

With both blog posts published, I reached out to the remaining keto sites with a softer pitch. I offered to create visualizations that they could include on their website, but I left it vague about what I wanted from the deal.

The results were no better than my first wave of pitches. Most sites never answered. A couple sent noncommittal responses. Some of them misunderstood and thought I was just offering to create custom visualizations for them to enjoy privately and never publish on their site.

In the end, I wasn’t able to get any new links to Is It Keto.

Now, I’m shelving the site. It’s a difficult decision because it has been growing consistently, and I’m sure I could get it to turn a profit if I kept working on it for another year. But of everything I could invest a year of effort into, I suspect this is not the one with the highest potential profit.

Fortunately, the site can run fine on its own, as it did for most of 2018. It just runs on AppEngine, so it will just chug along, and I never have to update any packages or reboot any servers.

My hope is that the site will grow organically as people click Is It Keto links in Google results. If the site makes it to the #1 spot on Google for more keywords, traffic could be 10-100x what it is today. If revenues grow to $500+ per month, then I’ll maybe pick it back up because that’s the point where I can hire people to expand it and still turn a profit.

In total, I spent about $4,500 on the site and earned only $76 in revenue so far. I doubt I’ll earn back my investment, but it could happen if growth continues at its current rate.

These are my takeaways from March, but I’ll probably do a full-length blog post about what high-level lessons I’ve learned from this project.

Is It Keto is on hold, so my top goal is to resist the temptation to continue working on it or monitoring it closely. In addition, here are a couple other things I’d like to achieve in April: