How removing a single link generated a 62% sales increase

I’ve finalized a logo concept and color scheme with the design firm, but we’re still working out some fine details before we pull the trigger on the new branding.

It’s been a long slog to get the custom hardware we need for the Voyager 2, but we completed manufacturing and received the first batch of hardware last week, so we should be ready to launch this week. We’re a little behind where I hoped to be because we’ve had trouble keeping up with demand for Voyager 1, but it should only delay us by a day or two.

I spoke to a few marketing firms, but I wasn’t ready to hire anyone yet. We’re struggling to keep up with TinyPilot’s growing sales as it is, so I’m pausing on marketing and focusing on scaling production to meet our current demand.

Due to supply shortages, I retired TinyPilot’s lower-cost product in October to focus on our premium product, the TinyPilot Voyager. That reduced the product catalog to just the Voyager and some accessories that don’t generate many sales, so I decided to scrap the catalog page.

I basically just removed a link from the site’s navigation bar.

In last month’s retrospective, I mentioned that I was starting to see sales trending upwards and wondered whether it was related to simplifying the product offering. After a month of extra data, I’m pretty convinced that it made a huge difference:

We’ve had spikes in sales before, but they always followed some obvious event like a mention on YouTube or a review on a popular website. Sales would spike and then slowly subside.

Since the consolidation to a single product, sales have been as high as our spikes in the past, except they don’t seem to be tapering off like they do for one-time events.

If I’m correct that the sales increase came from eliminating the catalog page, it’s the highest return on investment from anything I’ve done with TinyPilot. I got a 62% sales jump by removing one link!

The return of growing pains 🔗︎

For the first six months of TinyPilot, I was always scrambling to keep up with growth. Sales were doubling every four to eight weeks, so I constantly had to search for new suppliers and reinvent processes to scale up the business. While that growth was exciting, it was also exhausting. I was glad to settle into a more consistent, predictable pace for most of 2021.

The latest sales increase has brought back some growing pains. We have contingency plans for sales spikes, and they’ve served us well this year, but we didn’t have a plan for sustained growth like this.

Running out of power connectors 🔗︎

First, we noticed that we were using power connectors at a fast enough rate that we’d run out before our next delivery of circuit boards, which would prevent us from selling Voyagers.

I listed them out of stock for individual sale, and that slowed down the pace just enough to last us until the new shipment arrived.

[Sidenote: If you’re wondering why I was still selling power connectors even though I just made a huge deal about not selling anything but Voyagers, I can explain. There are still working links to some of TinyPilot’s secondary products through my DIY TinyPilot guide, but users can’t easily discover those pages by visiting the TinyPilot website.]

Running our of ribbon cables 🔗︎

Next, we started running low on ribbon cables. We typically buy them in bulk, and we have so many on hand that it’s not even worth tracking them in our inventory system. But because we’re not tracking them, we didn’t notice that our last order was running late. We were down to just 30 cables, enough to make only a few days' worth of Voyagers.

We use a non-standard ribbon cable size, so we get them special-ordered. Was I going to have to halt sales for weeks because of something as stupid as ribbon cables?

Luckily, our supplier was able to expedite our order and get us new cables within days. I also panic-bought another 1,500, so we should be fine for a while.

In addition, we’re going to start tracking these cables in our normal inventory system. We realized our informal tracking made it too difficult to tell the difference between “time to place a leisurely new order” and “this is an emergency!”

The last shortage is the one we still haven’t solved: the cases. We’ve always 3D-printed the cases because it gives us the flexibility to iterate quickly. We use a 3D-printing material that has a premium feel, and we frequently hear feedback from customers and reviewers about the quality of the case.

The problem is that 3D printing is slow, especially the material we use. It takes eight hours to print each Voyager 1 case. The Voyager 2 will take twelve hours. Our 3D-printing vendor bought an additional printer for us, but I expect to exceed the new capacity when we switch to Voyager 2. Sadly, our vendor can’t just buy new printers every time we increase sales.

In the short term, TinyPilot’s EU distributor is printing cases locally instead of buying them from us, so that lightens the load on our printer by about 30%. For the long-term, I’m working with my 3D-printing vendor to explore other materials that print faster but still have a premium feel. It also might be time to revisit injection molding, which costs $20-40k upfront but has an output of thousands of cases per week.

Migrating my side projects away from Google Cloud Platform 🔗︎

I mainly focus on my main business in these retrospectives, but I had some fun this past month migrating my side projects off of Google Cloud Platform (GCP).

I started using GCP about eight years ago. At the time, most cloud providers charged $10-20/mo to host a web app. Google services like AppEngine and Firebase could scale down to $0/mo for small projects, which made experimentation attractive. I’m much more likely to publish a new project if I know I’m not committing myself to pay $20/mo indefinitely.

Today, GCP is usually a poor solution for small projects. The services are so bloated and complex that it takes me about an hour of fiddling with settings and permissions to create and deploy a new, basic web app. Fortunately, there are great alternatives to GCP that offer lower costs, better development experience, and superior customer support (by which I mean any customer support).

Because I used GCP for so long, many of my side projects are still running on Google Cloud Platform, and they’ve been accruing more and more service fees. I spent evenings and weekends last month migrating my most expensive services away from GCP.

Here are what my GCP costs looked like before the great migration:

And here’s what costs looked like when I was finished:

On What Got Done and WanderJest, I let users upload images, and then I store the uploads in Google Cloud Storage (GCS) buckets. By default, GCS URLs are big, ugly messes like https://storage.googleapis.com/whatgotdone-public/.... I wanted a nice, tidy URL like https://media.whatgotdone.com.

This simple 80-step process explains the Google way of serving GCS files from a subdomain. It involves provisioning a static IPv4 address, setting up an HTTP load balancer, and generating a TLS certificate. I went through all those steps, not realizing that the load balancer would drive up my costs by about $18/mo per site.

I dramatically reduced that cost by switching to BunnyCDN. I worried that setting up a whole CDN would be a pain, but it was incredibly simple. Less than 30 minutes after discovering BunnyCDN as a service, it was serving my Google Cloud Storage bucket through the media.whatgotdone.com domain. All I had to do was tell Bunny the GCS bucket URL and the subdomain I wanted, then add a DNS entry.

My outgoing bandwidth fees come mostly from this blog and Is It Keto. I was hosting both sites on Google Firebase, where the bandwidth fees are $0.15/GB. My websites collectively serve about 150 GB/mo in bandwidth, but a surge in blog readers can drive that up by a factor of three.

I’d looked into Netlify in the past, but I dismissed them as a “we insist on being your CI” host. Then, Siddhant Goel told me about Netlify’s “manual build” mode that lets you skip all their CI nonsense. They have a $19/mo plan with 400 GB of bandwidth and $0.20/GB after that, so even in the rare month that I see a huge influx of visitors, I’d still only be paying ~$20/month.

My last significant cost was AppEngine hosting for What Got Done. For years, the cost had been ~$2/mo. In July, the bills suddenly shot up to $10-15/month, and I don’t know why.

Fortunately, What Got Done is a standard Go web app, so it doesn’t need to run on AppEngine. The harder dependency was on Google Firestore for data. I could have migrated AppEngine and Firestore separately, but dealing with Google service accounts and permissions is such a pain that I decided to make a clean break from both services at once.

To replace Firestore, I used SQLite and Litestream. SQLite is a simple SQL database that keeps everything in a single file. Litestream is a tool for syncing SQLite databases to the cloud. I used these same technologies to build LogPaste, and they worked well, so I wanted to invest more in them.

To replace AppEngine, I used fly.io. I’ve been experimenting with fly.io for the past year, and I consistently have good experiences with them. Their documentation is clear, their tools work how you expect, and their founders and lead engineers actively engage on their support forum.

My move to fly.io was mainly about reducing costs and gaining vendor independence, but the changes ended up improving performance tremendously. Most of What Got Done’s API requests had 2-20x speedups after I migrated to SQLite and fly.io. 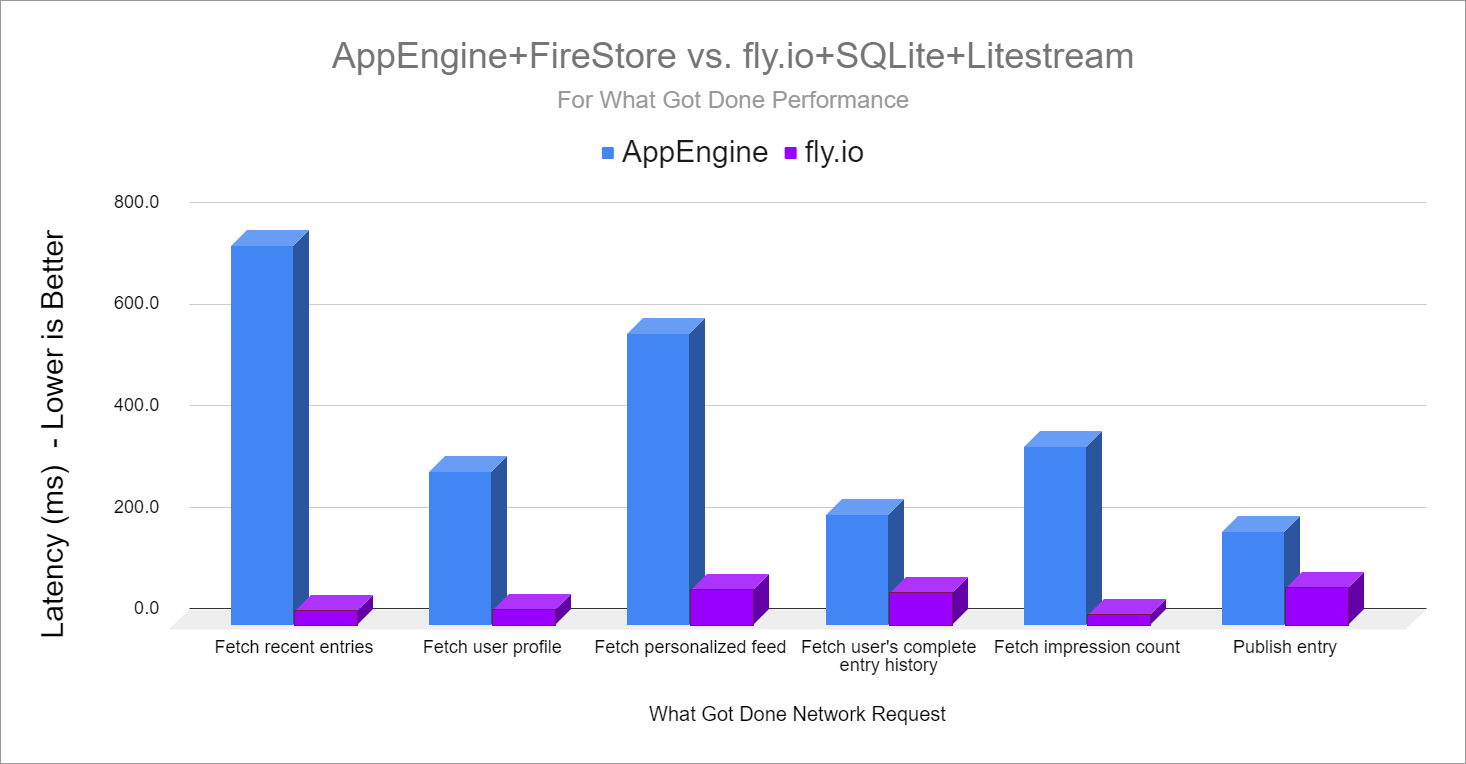 Here are some brief updates on projects that I still maintain but are not the primary focus of my development:

Is It Keto is still hanging around in the background earning small amounts of revenue. My only change this month was moving it from Firebase to Netlify, which reduces my hosting costs.

My blogging course had a handful of sales this past month. I considered running a Black Friday sale, but I was enjoying the long weekend of not thinking about business, so I decided against it. I’m glad I didn’t because I had a blast tinkering with What Got Done instead.

Zestful saw a big bump this month from a new customer who made around $700 in requests. The customer’s name seemed familiar, so I checked my emails. I had reached out to them three years ago, and they politely declined. I guess they needed a few years to think it over.

Note: I mentioned some services in this post, but I have no business relationship with any of them except as a customer. I hate reading seemingly genuine product recommendations on blogs only to discover that the author is profiting from referrals, so I’m deliberately not using any links that generate referral bonuses or affiliate fees.