Hi, I’m Michael. I’m a software developer and the founder of TinyPilot, an independent computer hardware company. I started the company in 2020, and it now earns $60-80k/month in revenue and employs six other people.

Every month, I publish a retrospective like this one to share how things are going with my business and in my professional life overall.

Prepare to transition TinyPilot’s fulfillment to a 3PL vendor 🔗︎

I underestimated how much spare capacity the local staff would have to work on this. Combined with an unexpected spike in sales, we didn’t make progress adapting our in-house fulfillment workflow to a 3PL vendor. Still, we can move forward with an imperfect process and improve it as the 3PL vendor frees up our time.

The support engineering team is becoming more effective than I expected. In addition to handling advanced support requests, the support engineers have been doing deep investigations to reduce bugs from occurring in the first place and improving TinyPilot’s diagnostic logging.

Reduce projects where I’m in the critical path 🔗︎

Launching a new TinyPilot model always requires a lot of my time. I’ve been through this process enough to anticipate a lot of the work, but I also know that no matter how much planning I do, there will always be work I fail to anticipate. Even though there are days I feel like I have some spare bandwidth, I’m trying to keep as much of my time free as possible.

TinyPilot hit another all-time high in sales, reaching $112k in total revenue. This is TinyPilot’s first month ever crossing the six-figure mark.

The jump was largely due to TinyPilot receiving a positive mention on Linus Tech Tips, one of the most popular YouTube channels for homelab enthusiasts. Even though the review was primarily about our competitor’s product, the channel has so many subscribers that TinyPilot saw a sizable surge in orders for the following two weeks.

I’m happy to see three-month trailing profit staying comfortably in the positive, even amid atypically high costs. TinyPilot is paying a premium to 3D-print cases beyond our normal capacity, but our costs should drop significantly in January when we switch to metal cases.

We don’t have enough time to save ourselves time 🔗︎

One of the goals for November was to begin transitioning fulfillment to a third-party logistics (3PL) vendor. I asked a member of the fulfillment team to review our workflows and prepare to hand them over to a 3PL vendor.

The next week, we saw a spike in orders from the Linus Tech Tips video, so there was no progress on researching the transition to 3PL. And then two weeks later, we were still catching up from the sales spike, so there was no additional progress.

The next time I met with the member of the fulfillment staff, I asked how much spare capacity we normally have for atypical tasks like this, and I was surprised to learn that it was roughly zero. The fulfillment team’s short-term tasks of assembling devices, shipping out orders, and responding to support requests was enough to occupy all of their hours for the week.

This is a familiar situation, though usually, the person with no short-term capacity is me.

For any workflow, there are generally obvious ways to free up time. It could be automation, hiring additional people, moving to a managed service, etc. The catch is that there’s a frictional cost to changing a workflow.

For the past few months, I’ve been drawing beautiful graphs of time commitment for outsourcing and delegation. In that spirit, here’s the amount of time I spend on a task before and after I hire someone to take it over: 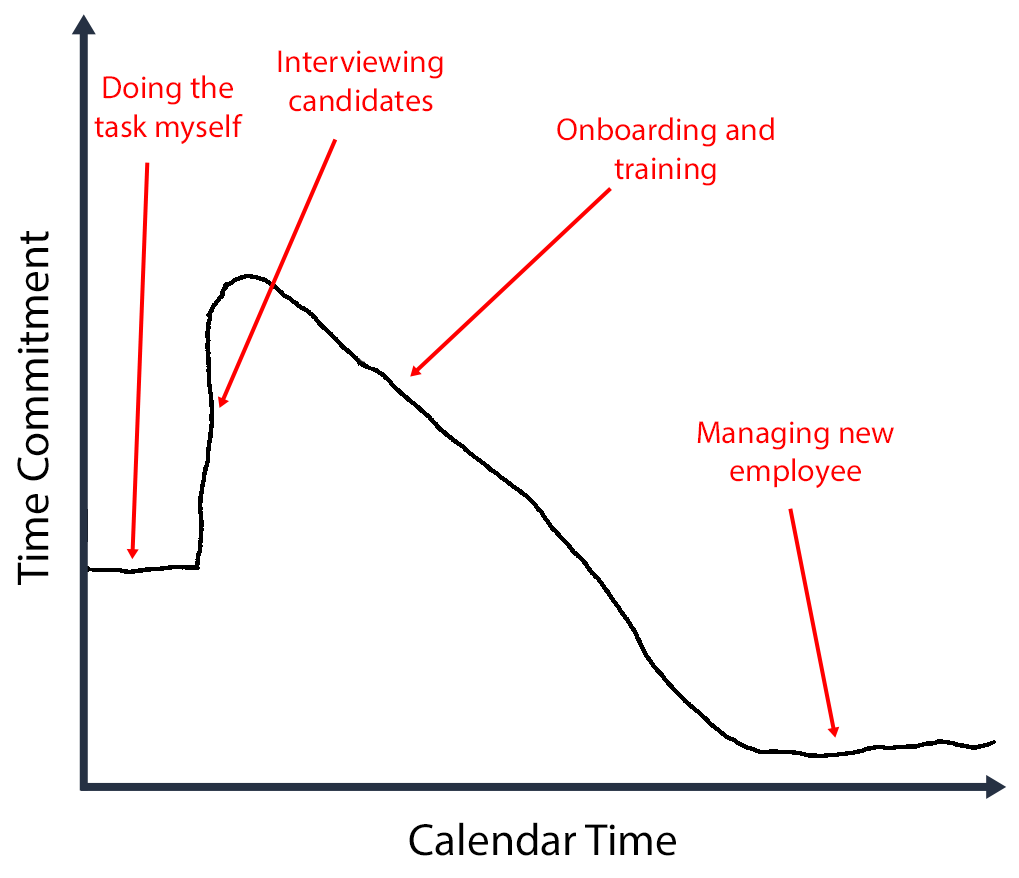 At the beginning, the task is time-consuming because I’m doing all the work myself. When I hire someone, I’m doing even more work because I still have to do the task myself in addition to the work of hiring and training a new person. I eventually reach net savings when the new hire is fully trained, but that can take weeks or months, depending on the task’s complexity.

In practice, there are only so many hours in the day. What happens if I take into account the limits of my working hours? 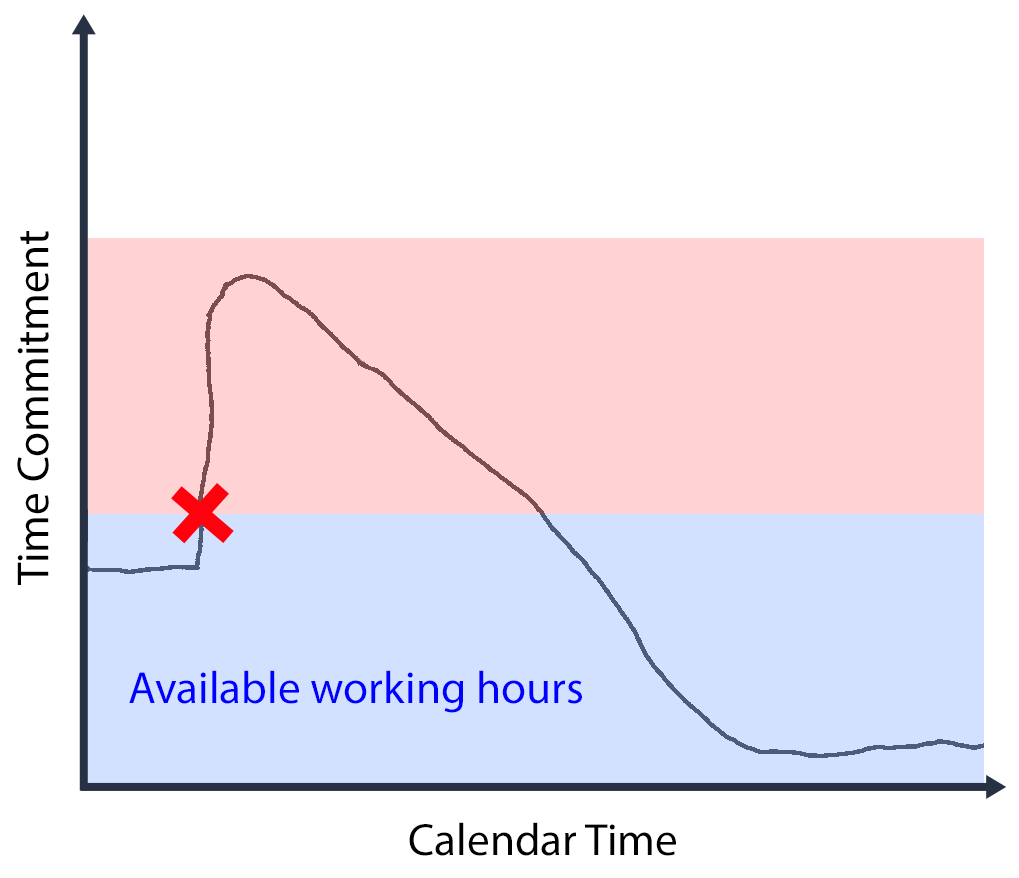 Whoops, now I can’t reach the post-hiring state because I don’t have available short-term capacity to hire and train someone. I don’t have enough time to save myself time.

Using long-term tasks as an early warning for exhaustion 🔗︎

The delay in switching to a 3PL vendor made me realize I need a better early warning system for running out of spare capacity.

My best idea is to be more conscientious about balancing everyone’s short- and long-term tasks. For example, the support engineers’ urgent responsibility is responding to customer support requests on the TinyPilot help forum and on our CRM platform. Support volume ebbs and flows, so when the support engineers have spare time, they look for recurring patterns in support requests and publish help articles or investigate deeper bugfixes.

Everyone at TinyPilot has a mix of short- and long-term tasks:

Long-term tasks can act as the canary in the coal mine. When a team’s progress on long-term tasks slows over time, they’re likely approaching their maximum capacity. At that point, I should find ways to reduce load by decreasing responsibilities or adding capacity.

There are two challenges with using long-term tasks as a warning sign. The first is that the team who’s most frequently ignoring their long-term tasks is the founder team, by which I mean me. When I’m overloaded, I won’t notice a slowdown on other teams’ long-term tasks. Even if I do, I don’t have time to do anything about it. I suppose the solution is to be more vigilant about the number of projects I take on so I can leave spare capacity for switching costs.

Getting out of the Ansible hole 🔗︎

Ansible is a tool for configuring servers automatically. I’ve been using it for seven years, and it’s how I manage all the virtual machines in my homelab.

When I started work on TinyPilot back in 2020, I needed a way to deploy code onto my Raspberry Pi and configure the OS functionality TinyPilot needed. Ansible was a good fit since remote system configuration is Ansible’s bread and butter.

When I published TinyPilot, the easiest way for me to let users install it was to replicate the workflow I used during development. I created a simple install script that bootstrapped an Ansible environment and then installed TinyPilot via Ansible.

At the time, I knew that the more conventional installation would have been to use Debian packages. The problem was that I didn’t know anything about creating Debian packages, and they seemed like a lot of work. Would I have to set up my own apt repository? Do I have to manage repo keys? TinyPilot depended on nginx, so how was I supposed to configure nginx from my own package?

Two and a half years later, the dev team is paying the price for my choice of Ansible. As TinyPilot has developed more features, our Ansible configuration has become painfully complex. If the installer was a pure shell script or Debian package, installation would probably take 10-20 seconds. Instead, all the overhead from Ansible drives the install and update time to six minutes or more.

Beyond the impact on the end-user, Ansible has a tendency to swallow up development resources. Ansible code is slow and tedious to debug, especially when dealing with operating systems and architectures that aren’t available in our continuous integration environment. Minor changes frequently balloon to a week of dev time.

Here are the things I wish I’d known about Debian when I started work on TinyPilot:

The hardest part of learning Debian was finding useful information amid all the noise. A lot of the resources basically say, “Just read the 9,000-page Debian maintainer’s guide, but ignore the parts that are out of date.”

The guides I found most helpful were:

Vincent was even kind enough to hop on a video call with me to answer some of my remaining questions about Debian packages.

I watch a lot of TV shows and movies, and I enjoy making recommendations to friends, but I often forget what show or movie I want to recommend.

I’ve checked around for apps that let you track movies and TV the same way you’d track reading with Goodreads, but nothing matched what I had in mind. I feel like my friends are exhausted from social apps that default to public, so I wanted something that lets you create a small community of friends who want to share recommendations. Less like Twitter, more like Discord.

It’s not quite ready for prime time yet, as the reviews are private, and it only supports a single user. Right now, it’s only effective as a private movie journal for one person, but the next feature on my list is support for multiple users.

User management is notoriously hard to get right, so I’ve always avoided rolling my own implementation. For the past few years, I’ve used my friend David Toth’s UserKit service to manage users. UserKit has been great, but it’s not open to the public yet, which makes it impractical for other developers who want to run ScreenJournal on their servers.

I looked for an open-source user management framework for Go, but the majority relied on OAuth from external services, which I didn’t want. The rest were so heavyweight and complicated that I didn’t want to bother.

Instead, I’m living dangerously and rolling my own user management. For session management, I’m using jeff, and for authentication, I’m going to use bcrypt and hope for the best.