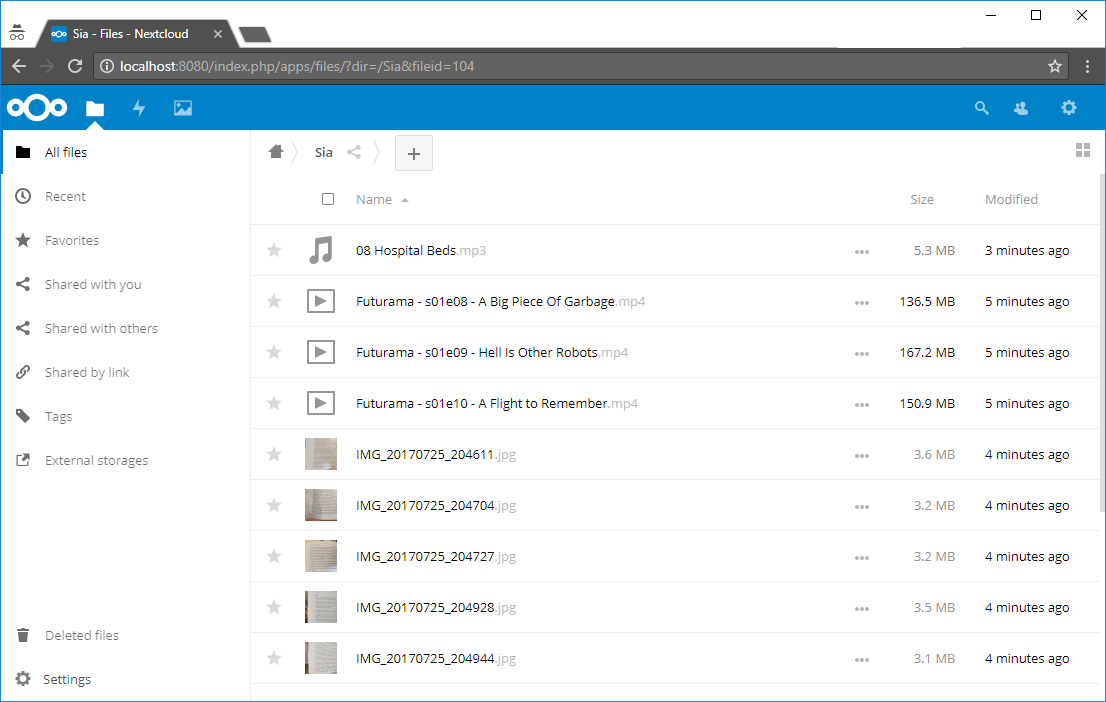 I created a screencast that walks through the steps of this guide and demonstrates the final result. It achieves an identical result to this blog post, but performs more configuration in GUIs, whereas this blog post uses the command line whenever possible.

If you prefer video tutorials, I recommend you download the files in the “Create files and folders for Docker” section below and then follow along with the video.

This guide is aimed at intermediate users. If you don’t have any experience with Docker containers or virtual machines or you’re not comfortable using the command line, it will be difficult for you to follow this guide. 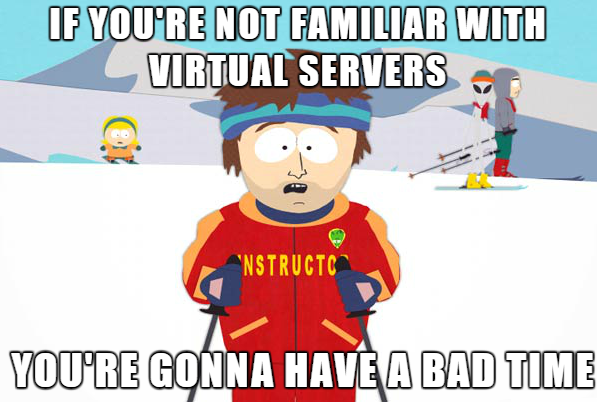 I used Windows 10 in the video demo, but this tutorial is completely system-agnostic. The steps I provide will work on any 64-bit operating system that supports Docker, which includes Windows, Mac OS X, Linux, and even some network storage devices.

To complete this guide, you will need:

The steps in this guide require about 20 minutes of active time. However, there are several points in the installation process where you must wait minutes to hours for Sia to complete processing, so the total time is 3-4 hours.

Components of this solution 🔗︎

I use Sia in this solution to provide backend storage for the web app. I’ve written a few posts about Sia previously, as it’s one of my favorite new technologies. Sia is a decentralized file storage network. Users can connect to Sia and rent out their unused disk space to earn money. Prices on the Sia network are very low right now, which is how you can build a cloud storage solution and pay so little for disk space.

If you’re familiar with Sia, you might be aware that Sia has its own graphical user interface, called Sia-UI. This UI is limited in functionality. Its main weakness is that it’s a desktop app, so you can only access your files from a single computer. It doesn’t support any media viewing, so if you want to view photos or video within your cloud storage, you have to copy the file to a folder on your local machine and open the copy.

To overcome Sia-UI’s limitations, I use Nextcloud in this tutorial. Nextcloud is an open-source cloud storage web app. It offers a web interface similar to Dropbox or Google Drive. Nextcloud is designed for compatibility with many different storage providers, including Amazon S3, Dropbox, and OpenStack. In February 2017, the Sia team wrote a custom plugin for Nextcloud, which I will use to connect Nextcloud with Sia.

If you’re interested in testing out Nextcloud before you proceed further you can try a free, instant demo on the Nextcloud website.

Nextcloud is tricky to install because it requires a database, a web server, and several third-party software libraries. Rather than go through the tedium of Nextcloud’s installation process, I use Docker to handle the entire setup.

Docker allows developers to build apps in “containers.” In Docker terms, a container is an isolated environment where the app has access to all the components that it needs to run and nothing extra. In this guide, you’ll create containers for Sia and Nextcloud and use a feature called docker-compose to join them together so they can communicate.

To begin, you’ll create a directory for this solution and download all the necessary files:

After downloading these files and creating the appropriate folders, your directory should look like this:

Below, I’ve included the full text of each file and a brief discussion of what each one is doing.

This file defines the high-level architecture of the web app. It tells Docker how to load the Sia and Nextcloud containers and specifies the configuration options the containers need to communicate with each other.

This configuration also sets up Docker storage volumes so that the containers can store data that persists even if the container itself is destroyed. ./sia-data:/mnt/sia-data gives the Sia container access to the sia-data/ folder you created above. Within the container, that path will appear as /mnt/sia-data. The ./sia-uploads:/mnt/sia-uploads line achieves a similar effect.

Sia and Nextcloud expect to run on the same system with a single filesystem. In this tutorial’s architecture, they are on different systems with independent filesystems, but the sia-uploads lines in both containers' configurations allow them to share a path for uploads, which is all that’s necessary.

Finally, nextcloud-data:/var/www/html allows Nextcloud to persist its configuration information in a named Docker volume called nextcloud-data. This ensures that when you restart your Nextcloud container, you don’t need to reconfigure Nextcloud from scratch.

This is the Dockerfile for Sia. It creates a Docker container starting from the barebones Debian Jessie build of Linux. It then downloads the latest release of Sia (which is 1.3.2 as of this writing), unzips it, and runs siad, the Sia server daemon. The --modules gctwr flag loads only the Sia modules you need for renting Sia storage. The --sia-directory /mnt/sia-data flag ensures that Sia uses the persistent volume specified in docker-compose.yml.

This file is straightforward because Nextcloud publishes its own Dockerfile. The only thing I added was a line to listen on port 80.

With the Docker files and folders in place, you’re ready to launch your containers. From a command prompt cd into your sia-nextcloud directory and enter the commands below:

To check the status of your containers, use the logs command:

When Sia has finished loading, you will see a sequence in the logs that looks like this:

If you run siac within the container, you will see that Sia has begun syncing its blockchain with the Sia network:

Optional: At this point, you can run Sia-UI on your local machine to show a graphical display of what your Docker container’s Sia server is doing. Sia-UI normally runs its own Sia server instance, but if it detects an existing instance of Sia listening on port 9980, it will connect to the existing server instead. Sia-UI gives you a more visual representation of Sia’s activity, but it is purely optional in this tutorial.

Sia needs to download its full blockchain before you can begin using it, but this process can take 1-3 days to complete. I’ve provided an optional workaround below to reduce the sync time to 30-60 minutes. If you prefer to wait for Sia to sync on its own, you can skip this step and proceed to the next section.

To apply the blockchain sync workaround:

When Sia finishes loading, you’ll see a message in the logs similar to the following:

In my tests, this process took 50 minutes on an SSD. If you’re running Sia on a hard-disk drive (HDD), it will take several hours.

Now, you need to wait for Sia to finish syncing its blockchain. You can check on status by periodically running this command:

When Sia is synced, you will see Synced: Yes in the output, like this:

Next, you need to create a Siacoin wallet within the Docker container and send it at least 500 SC.

Warning: If you have an existing Sia wallet seed, do not re-use it within your Docker container while your other wallet is running. Sia has undefined behavior if you run two wallets simultaneously with the same seed.

To create a new Sia wallet, enter the command below:

Sia will generate a 29-word passphrase called a “wallet seed” and display it in the console, similar to the example output below:

This seed controls access to your Siacoin balance, so copy it to a safe place and be sure never to post it online. Sia confusingly displays a seed, followed by an identical password. This surprises many users, but it is Sia’s intended behavior.

After you create the wallet, you need to unlock it with your seed passphrase. Enter the command below, then paste in the seed you generated above.

Send at least 500 SC to the wallet you generated. If you don’t have Siacoin available, you can either buy it or mine it.

Sia requires you to purchase storage space up front, in the form of “renter contracts.” The command below creates an allowance for Sia to purchase 500 SC of contracts for 12 weeks of storage.

At the time of this writing, 500 SC purchases ~2 TB of storage, so you can increase the contract amount if you need more storage. Prices will change over time as the value of Siacoin fluctuates and more renters and hosts enter the market, but your storage price is guaranteed for the duration of your contract.

After you create an allowance, Sia will begin forming storage contracts. This process takes 20-30 minutes to complete. You can check the number of contracts Sia has formed by running the following command:

Proceed to the next step when Sia has created at least 20 contracts.

Sia is now ready to begin storing data, so it’s time to configure your Nextcloud container.

When you load the Nextcloud Docker container, Nextcloud’s files are present within the container, but Nextcloud is not yet installed, so your first step is to install Nextcloud with the command below.

You should see the following:

Sia acts as an external storage provider in Nextcloud, so enter the following command to enable Nextcloud’s support for external providers.

It’s time to install Nextcloud’s Sia app. Unfortunately, it is not possible to install a Nextcloud app via the command line, so you’ll need to perform these steps in a web browser.

Note: Nextcloud recently added support for performing app installs on the command line, but it looks like the feature won’t be included in a Nextcloud release until version 13.0.

The last step of this process is connecting the Sia Nextcloud app to your Sia server instance. To do this, enter the commands below:

Your Sia Nextcloud integration is complete!

If you open the Files tab of Nextcloud in your browser, you will see a Sia folder. Nextcloud will automatically back up all files in this folder to the Sia network. 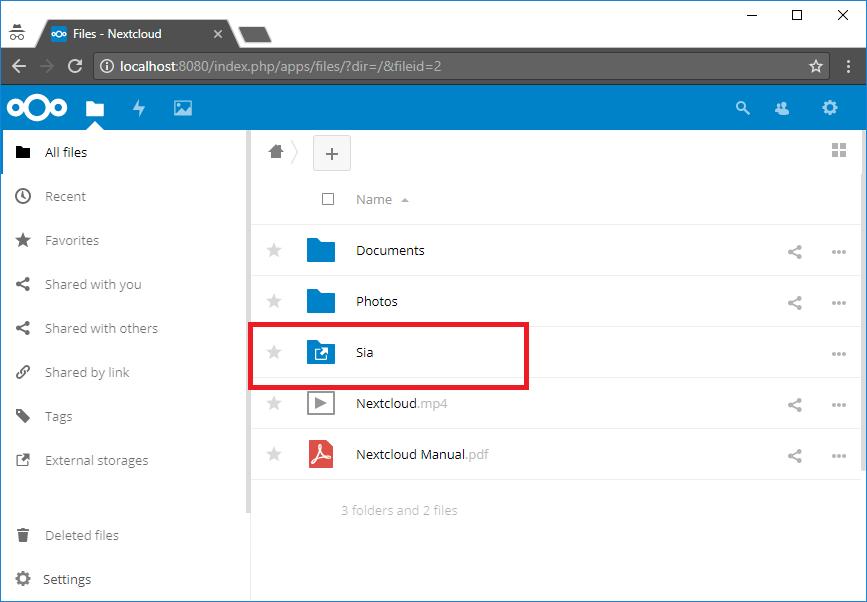 When you upload a file to the Sia folder in Nextcloud, the app copies it to the sia-uploads folder you created earlier in the tutorial. Nextcloud then creates a backup of the file in the background by uploading it to the Sia network.

To save space locally, you can delete files that have been fully uploaded to Sia. You can check which files Sia has fully backed up with the following command:

Any file with a redundancy of 3.0 or greater is safe to delete from sia-uploads.

If you try to download or view a file that you deleted from sia-uploads, the Sia Nextcloud app will automatically re-download the file to make it available to you locally, though this may take seconds to minutes depending on the size of the file and your Internet speed.

While Sia natively allows users to create folders to organize their uploads, the Sia Nextcloud app does not support folder creation. The web app presents the option, but if you try adding a folder, it just says, “Could not create folder.”

The Nextcloud app includes a barebones text editor for editing plaintext files within your cloud storage folder. Unfortunately, this does not work on files within the Sia folder. If you try to edit a text file in your Sia folder, Nextcloud presents you with a barrage of angry error messages and does not save any of your attempted edits.

This tutorial showed you how to deploy your own instance of Nextcloud and add low-cost file backup with Sia.

I expect more and more apps to integrate with Sia in the coming months. A few days ago, Sia announced a new integration with Minio, a distributed object storage server. The techniques you used in this tutorial will help you deploy other apps and integrate them with Sia.