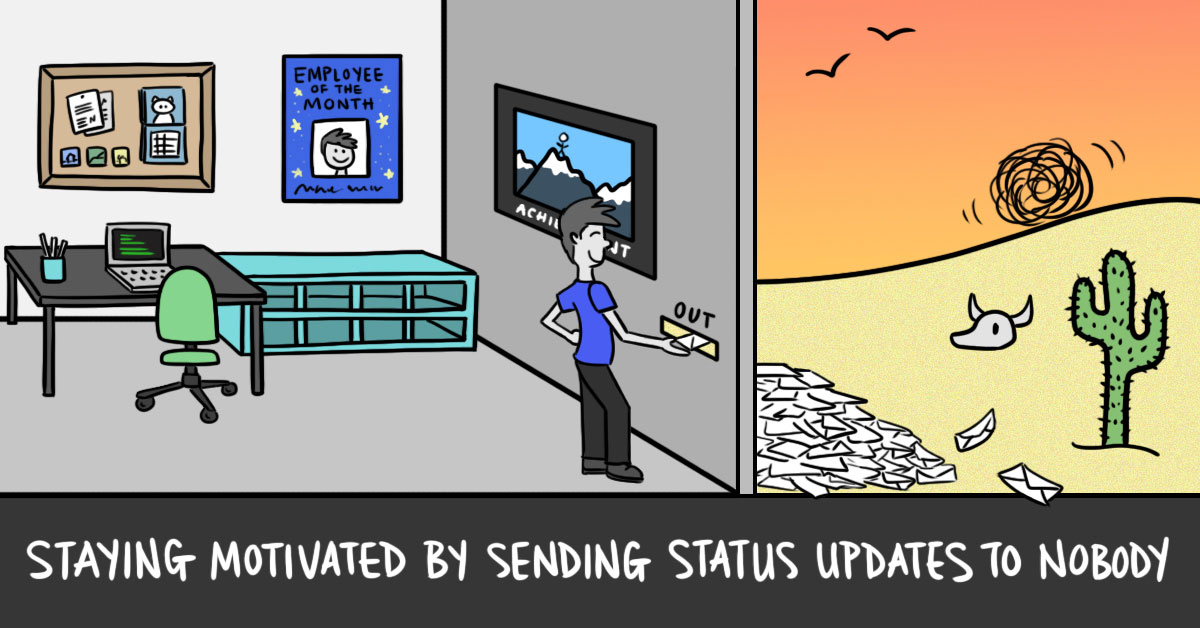 At my last job, status meetings with my manager were outstandingly efficient. He never ran me through the typical drill of listing list off everything I did since our last meeting. Instead, we jumped right to the meaty topics of career growth, team development, and challenging technical problems.

How did my manager have the right context so that we could skip to the good stuff? He read my Snippets.

What are Snippets? 🔗︎

Snippets is the name of an internal tool at Google for sharing status with your teammates. It’s just a plain text field where you write down your accomplishments for the week. The following week, your manager and teammates receive your update in an email digest.

At first, it seemed like a pointless idol in Google’s cult of internal openness, but it soon became clear to me that a surprising amount of value came from something that was basically just a textbox.

Like most developers, I had always hated team sync meetings. Even if the meeting was only an hour, the interruption ruined my productivity for several more. I understood why they were necessary, but they were always painful to endure.

At Google, something felt distinctly odd about our team meetings: they were actually engaging. Our discussions were lean and productive because everyone walked in with a shared context from reading each others’ Snippets. Before Google, it never occurred to me that fact-reporting was the boring part of meetings, and you could do that ahead of time.

Setting aside time each week to write updates required discipline and focus, but it created a virtuous cycle. The more effort we put into our status updates, the less time we spent in tiresome meetings.

Snippets also provided a friendly medium for small wins. If you squeezed a 3% performance gain out of a data processing pipeline, that might not merit an agenda item at the team meeting, but Snippets gave the achievement visibility and allowed your teammates to recognize your contribution.

After two years at Google, I switched teams. Tragically, my meetings regressed to the stale “let’s all recite facts” format I suffered through at previous companies. It turned out that my new manager didn’t believe in Snippets. Instead, he preferred to hear status updates the traditional way: in person.

This preference baffled me. How could anyone experience the beauty and efficiency of Snippets, then insist on going back to the stone age of tedious, inefficient meetings? It would be like hearing someone say, “Yes, I’m aware of emails, but I prefer to do things the traditional way. Send me a fax.”

Few people on the new team bothered to write Snippets. If we had to re-explain everything at the team meeting anyway, there was little incentive to prepare a written version that our manager would ignore. I gave up on them as well, bitterly hoping that some status-update-related disaster would disintegrate our team and my manager would recognize his folly and hubris in rejecting Snippets.

That didn’t happen. Instead, I found myself writing Snippets again a few weeks later, knowing full well that my manager would never read them.

The joy of sending status updates to nobody 🔗︎

Friday afternoons are when my brain lies to me about my work. It often tells me that I wasted an entire week investigating a bug and have nothing to show for it.

Writing status updates forced me to see my week objectively. I’d review my code check-ins, outgoing emails, and calendar. Invariably, this exercise reminded me that I accomplished far more than my bleak, never-gonna-solve-this-bug mindset suggested.

Sometimes, I completely forgot about a cool feature I launched on Tuesday because of an unrelated issue that popped up on Wednesday. Even when a single bug truly did absorb my week, my investigation always produced useful artifacts like better documentation or new automated tests.

Without Snippets, I forgot all that and remembered only what I hadn’t accomplished.

Other tools don’t get it 🔗︎

In early 2018, I left Google. Without access to my beloved Google-internal tools, I searched for an external replacement for Snippets to no avail.

There are dozens of “share status with your team” services, but they’re all top-down rather than bottom-up. That is, they’re designed for managers. They promise pretty graphs and dashboards so that the manager feels like they have their finger on the pulse of the team.

Everyone enjoys cool visualizations, but generating them requires the employees to enter information in whatever rigid format the tool expects. Team members have to do bookkeeping for the sake of bookkeeping and concoct numbers to represent how “complete” each task is.

Snippets was just a textbox. Employees had full autonomy over how they described their work without any overhead.

I’m blocked because I don’t have a textbox? 🔗︎

Without a ritual to end each week on a positive note, my work just felt like a series of thankless tasks. My morale dwindled, and I kept fruitlessly searching for a status tool that matched the simplicity of Snippets.

One day, a profound and obvious realization struck me — Snippets is just a textbox. I could get a textbox anywhere.

I immediately created a new Google Doc and wrote my update for the week:

I recorded my status updates in that private Google Doc every week for a year. Nobody else saw it, but that was fine. It gave me back the habit I was missing. Each week ended with a reminder of how much I accomplished, and it felt great.

After writing private updates for a year, it still gave me satisfaction, but I missed writing for an audience. I saw the myriad of benefits I gained by publishing my monthly retrospectives and wanted to do the same thing for weekly updates.

One of my 2019 goals was to gain expertise in a JavaScript framework, so that felt like a convenient excuse to create my own status sharing web app. It’s called What Got Done:

I record my status updates in it every week. In the last month, the site has attracted three other users. Hear that, investors? 300% month-over-month growth!

If you’d like to experience the joy of reviewing your accomplishments each week, come take it for a spin. It’s free.